About 15 years ago (whoa!), I was researching which MP3 player to sink my limited funds into.

I did not want an iPod, a position that I continue to hold to this day – the veneer is nice, but the premium you pay for an inferior experience (particularly on the library management end) wasn’t worth it for me.

One of the options way out of my range was a little number called the “Rome MP3” – it managed to straddle both ends of the technological spectrum by simultaneously being a solid state MP3 player and a playable cassette. I’ll let that sink in. 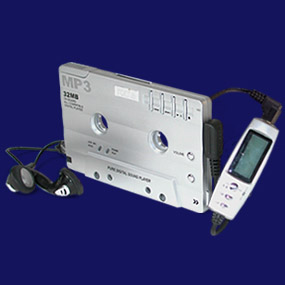 Check that puppy out.

The Rome sported 32MB of memory (around 10 songs in crappy quality by today’s standards) – but allowed you to use SD cards… or maybe the less useful sister to SD cards, MMC – to expand the memory. At the time I had visions of arranging all my music on little cards and swapping them in and out, which in retrospect illustrates just how much we view the future through the lens of the present (expandable storage, even when you don’t have to constantly swap it, has been a resounding failure).

It also came with a remote that had… wait for it… an LCD. This was a big deal at the time.

Judging by this review, which has outlived the product itself, along with the company that manufactured it, it cost approximately a gajillion dollars (adjusting for my spending power at the time) and even if they had been able to ship it to me, back then international shipping was about as expensive as the stuff you bought. We still have a ways to go, but things are better now.

A decade and a half later, some smug hipsters have cranked out this cheap item, complete with saccharine love story video, that no doubt a marketing grad fresh out of school is hoping will “totes go viral”.

I initially mistook it for a throwback to the Rome – a USB device that you could play as a cassette!

But no, it’s exactly what they don’t tell you it is – an expensive way to buy 128MB of NAND so you can impress your crush, who lets face it, probably hasn’t owned a cassette in their life before, but had an older sibling who was always watching Hi Fidelity so totally loves all that retro stuff.

You know what would mean more to me? If someone disassembled an actual cassette and inserted an MP3 player into it. At least then it would have been homemade.